Back in 2007 our team, working with our friends at British Geological Survey, the Marine Institute in Ireland, and the Joint Nature Conservation Committee, went out to explore two submarine Canyons (Dangaard & Explorer Canyon) in the UK’s South-Western Approaches.  During that expedition we discovered hundreds of mini-mound features on the canyon interfluves (the area between the canyon heads).

Seabed bathymetry of the Explorer and Dangaard Canyons.

We only had time to run our video cameras over 3 of these mound features, but what we saw told us that these were in fact cold water coral (CWC) mounds.
CWC mounds (also known as coral carbonate mounds) are structures found in the deep-sea and formed from the progressive growth and decay of reef forming hard coral species (Scleractinian corals). The ones we know of are typically composed of Lophelia pertusa and / or Madrepora occulata, but it is possible mounds may be formed from any of the reef building CWC species. Very large mound features occur and have been well studied in the Porcupine Seabight west of Ireland. These mounds may be up to 350 m high and 2 km wide at their base and tend to occur in water depths of 500-1100 m. The mounds we discovered in 2007 are much smaller (hence we called them mini-mounds) at only 100-200 m wide at their base, and 5 m high. They are also in much shallower water (200-550m deep) and so represent something a little different.
Since our discovery we have learned that four mini-mound provinces have been documented in this region, on the Porcupine Seabight upper slope (Irish margin), near the Dangaard-Explorer Canyon (Celtic margin), the Guilvinec Canyon (Armorican margin) and between the Ferrol and A Coruña Canyon (Cantabrian margin). All occur within this same depth range of 200-550m and all are of similar size. How these mini-mounds relate to the better known larger and deeper CWC mounds is unknown, but our working hypothesis is that they represent some kind of start-up phase in larger mound formation.
Over the next 11 days we will study the mini-mounds of the Ferrol Canyon and the Dangaard-Explorer Canyons to try to understand: 1) how old they are, and how the oceans have changed since they started to form to present day? 2) how they are formed? and 3) the biology and ecology of these mound systems? 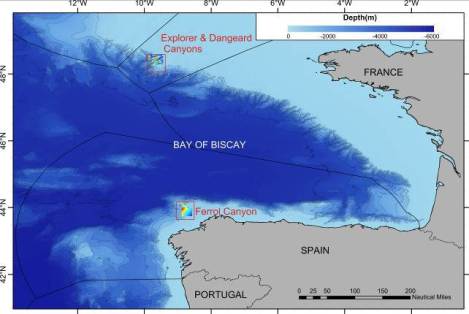 Map of the areas we will be studying on this research cruise.

They are also very fragile and easily damaged by human activities. Most reefs off the UK are found in deep water (500 m +) but there are examples that are a lot shallower. The Mingulay reef complex is found at depths of about 100 to 250 metres and reef like thickets of coral are also found on Rockall Bank at depths of 250-400m. There is also evidence that CWC reefs were also once present in many areas of shallower water along the European margin including Dingle Bay in Ireland and La Chapelle Bank in the Bay of Biscay. 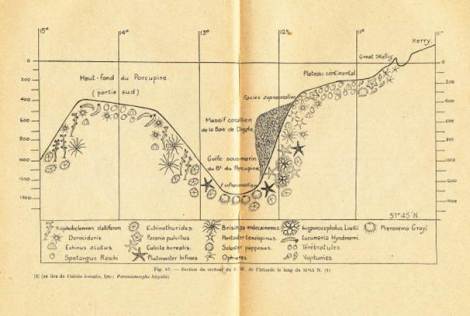 The coral on the mini-mounds we observed in 2007 was rubble. What we would like to understand is whether it is rubble because oceanographic conditions have changed with climate change and the coral is no longer able to grow here (thus the mounds will not get any bigger), or whether the coral has just been damaged by other human activities such as bottom trawling, and if left alone may recover.

Tomorrow morning (Friday) at 10am we will set sail on Research Vessel Belgica on a 10 day voyage to explore these enigmatic mini-mounds. We will keep you posted with what we find.