I write this after a busy day acquiring seismic, vibrocores and video data (but more about the video from Kerry next time!). We have broken the Belgica record for the longest core on deck (again!) at 229cm which is a fantastic feeling. We are getting closer and closer to the maximum length of 300cm that this vibrocorer can acquire. Maybe tomorrow we will achieve that goal! But I am getting ahead of myself… 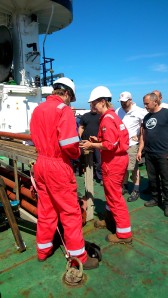 The BGS team processing a core on deck.

Last night, and up to mid-morning, we were acquiring seismic data over the Dangeard Interfluve. The seismic was acquired using the University of Ghent sparker system with all the University of Ghent, Vigo and Plymouth scientific crew pulling a watch on the seismic. These lines added to those acquired during the MESH survey in 2007 and were located over the mini-mound province we are currently exploring with the vibrocorer and video. These data will help us better understand the distribution, seismic character and depositional history of the Jones, Cockburn and Little Sole Formations in this area. These data will also hopefully tell us a bit more of the story of the evolution of the mini-mound province. We completed seismic data acquisition mid-morning and the vibrocorer was in the water by lunchtime. 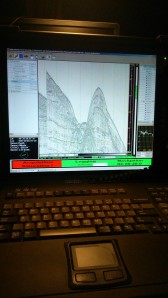 Over the course of the afternoon we retrieved 4 cores from the sea bed totalling 501cm, including the 229cm core I mentioned earlier! We have managed to acquire 6 cores in total so far during this campaign. Cores through mini-mounds will help us unravel the evolution of these enigmatic features and cores through non-mounded sea bed will tell us about the evolution of this section of the European margin such as the deposition of sediments from contour currents.What is great about this campaign is that everyone has managed to participate in the vibrocore operations. From handing us tools as we need them, carrying batteries (they are really heavy!) around the deck, unloading the core barrels following a dive and cleaning the core liners ready for marking up. It has been great fun in the sun so far!
Following the end of coring activities we need to “maintain” our vibrocorer, change the batteries, and put the old ones on charge. Make sure there is no wear-and-tear damage that needs to be addressed and prepare it for a quick launch in the morning. 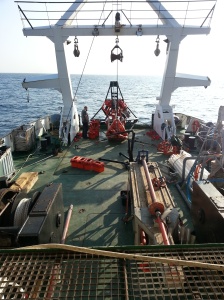 Changing the batteries on the vibrocorer

While the British Geological Survey team were carrying out maintenance, Kerry and Marcus were busy preparing the video frame for its inaugural dip in the sea, very exciting! When I was really meant to be helping shift batteries around and clean out core barrels I was dashing off to see how Kerry and Marcus were doing. The connectors and cameras were double and triple checked. The checklist of tasks was consulted and ticked off one by one. Then the video frame (still unnamed) was pushed off the Belgica by its makers!
As I write it has completed two transects and we are currently transiting to a third. Congratulations Kerry and Marcus on a successful start to video acquisition this campaign!
Fingers crossed that we keep the sun shine and calm seas for the next 5 days.
Heather 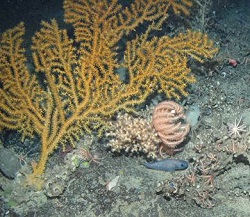